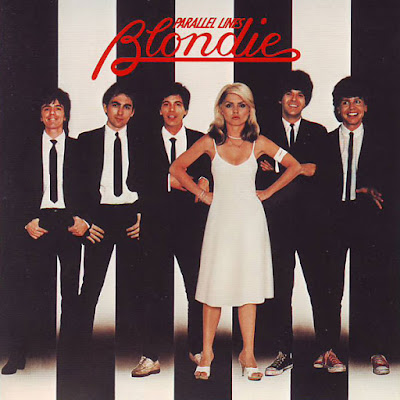 Blondie : Hanging on the Telephone

In September of 1978 Blondie released their breakthrough album Parallel Lines. Producer Mike Chapman ( who helmed hits like "Ballroom Blitz", "Hot Child in the City" and "Can the Can") brought the best out of the band and singer Deborah Harry. This is one of the great pop albums of the decade and remains one of my favorites.

It kicks off with a cover of "Hanging on the Telephone", recorded a year earlier by the LA power pop band The Nerves. Over the course of the next 40 minutes Blondie shows they can also do pure pop, disco and with "Fade Away and Radiate", even art rock worthy of its Robert Fripp solo.

In Blondie's third album, Parallel Lines, the band drops the brooding artiness of its previous records and comes on like and ambitious pop-rock group. Or rather, a rock'n'roll band with an ambitious pop vocalist named Deborah Harry. In the past, Harry has always managed to make a virtue of her stiff, severe crooning, and her vocals complemented Blondie's clipped, urban-raw playing. But the melodies were frequently lugubrious and much too involved with a Warholian despair that took the form of nonstop deadpan cheekiness. This cool demeanor provided some incredible pounding -- Clem Burke's drumming always carried the band beyond mere art rock -- but never gave Blondie's songs the jolt or hooks that Harry's blank-slate singing seemed capable of delivering so well. 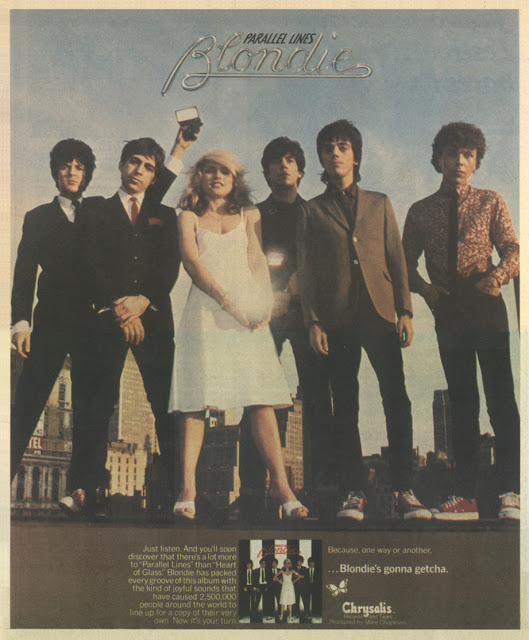 Throughout Parallel Lines, however, the hooks cascade and Harry belts them out with a new expressiveness. On pop roller coasters like "Pretty Baby" and "Sunday Girl," her swoops and the simple guitar/drum backing reveal enthusiastic kids behind the pose of cynical artists. Producer Mike Chapman mixes the guitar of Chris Stein right up beside Deborah Harry's voice, and each of these twelve short, pungent tunes builds to its own little epiphany of pop, from girl-group sass ("Pretty Baby") to Rolling Stones seediness ("Just Go Away"). On "Sunday Girl," you sense the smile that Harry never exposes in her publicity shots, and the song is a triumph of saucer-eyed hard rock. The singer's cuteness has the bite of bitterness, while the perky melody is made ominous by the intensity of Stein's lead guitar.

As if to drive home Blondie's new range, "Sunday Girl" is followed by "Heart of Glass," a mating of Kraftwerk and Donna Summer that adds humanity to the machinelike pace and steeliness to the imploring female narrator.


And it's this steeliness -- this transcendence of all the romantic stereotypes Deborah Harry embraces -- that makes Parallel Lines so continuously enjoyable and moving. Harry's no longer the sexy zombie, and she won't take any more abuse without showing contempt for her abusers. Her gritty "I'm gonna getcha" (in "One Way or Another") and the entire sardonic dismissal of "Just Go Away" are witty flourishes that, in the course of this exhilarating LP, come to seem genuinely brave. 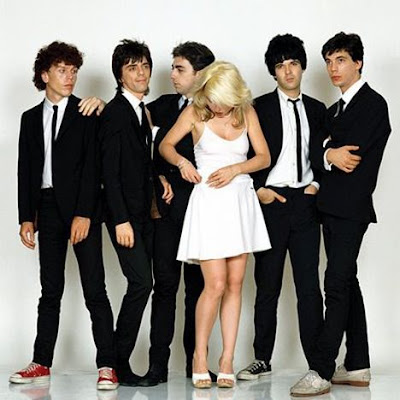 From Robert Christgau's review in which he gave the album an A grade:

As unlikely as it seemed three years ago, they've actually achieved their synthesis of the Dixie Cups and the Electric Prunes -- their third is as close to God as pop-rock albums ever get, or got. Closer, actually -- even on side two every song generates its own unique, scintillating glitz. What seems at first like a big bright box of hard candy turns out to have guts, feeling, a chewy center, and Deborah Harry's vocal gloss reveals nooks of compassion and sheer physical give that make the protagonists of these too-too modern fragments seem as tragic (or untragic) as those of any other epoch. Plus the band really New Yawks it up -- try the chorus of "Just Go Away."

From Billboard ( note that they miss #1 "Heart of Glass" in their list of best songs) :

Blondie's third album is less concentrated on infantile pop remakes of the '60s and focuses on creating its own sound within a contemporary pop framework. While still relying on the harmonious sound of the better girl rock groups of the '60s, producer Mike Chapman, master of commercially viable pop productions, steers lead vocalist Deborah Harry in a direction that is indicative of maturation in terms of rock delivery, credibility and sheer vocal power. The six-piece band plays solid rock with some masterful guitar riffs popping up in many a song. The melodies stick, the multilayered harmonies work, and the end result is witty, infectious rock. Best cuts: "Hanging On The Telephone," "Parallel Lines," "Picture This," "11:59." 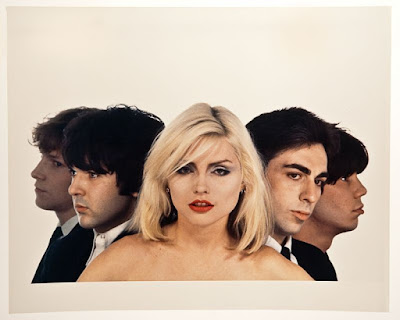