I Got Chills, They're Multiplyin' 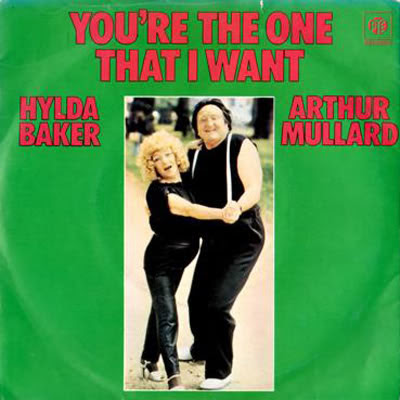 Hylda Baker and Arthur Mullard : You're the One That I Want

On September 3, 1978 two aging stars of the British screen, Hylda Baker and Arthur Mullard, hit the UK Top 50 with their version of Olivia Newton-John and John Travolta's hit from the Grease soundtrack, "You're the One That I Want". Their version would hit #22.

Not to be outdone, German comedians Helga Feddersen and Dieter Hallervorden hit #4 in their country with "Du, die Wanne ist voll" which literally translates to "You, the bathtub is full". The joke consists of using German words that sound similar to the English ones.