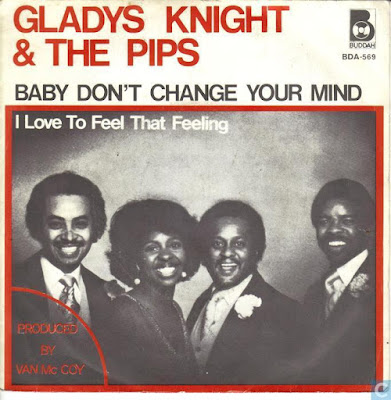 Gladys Knight and the Pips : Baby Don't Change Your Mind

This week in 1977 the new Gladys Knight and the Pips single, "Baby Don't Change Your Mind", entered the U.K. charts at #33. Written and produced by Van "The Hustle" McCoy, who also wrote David Ruffin's "Walk Away from Love", "Baby" would be the soundtrack to one sizzler of hot Summer , peaking at #4 in the U.K. and #10 on the US R and B charts.

The video below is a lot of fun. You can see Gladys's older brother "Bubba" Knight, cousin William Guest and Edward Patten practicing their new steps with the great Motown choreographer Cholly Atkins behind them.

First recorded by The Stylistics in 1976: