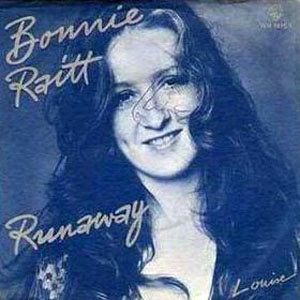 This week in 1977, Bonnie Raitt's cover of Del Shannon's UK#1 smash "Runaway" entered the Billboard Hot 100 singles chart at #98. The song would peak at #57 in July, her highest charting single until the 1990s when Bonnie released the #1 album Nick of Time.

"Runaway" comes from Bonnie's 1977 album, Sweet Forgiveness, the commercial pinnacle of her early career. Many critics didn't care for the "Runaway" cover, but had good thing sto say about the album. Case in point: Robert Christgau with this A- review.

Although Paul Rothchild edited Bonnie's road band as painstakingly as he did the El Lay pros of Home Plate, this came out sounding unfashionably raw, almost live, because instead of punching in the perfect note and the clean tone he went for the most intense moment available from months of takes. I don't like "Runaway," which is flat and plodding and wrong for her, and I wish there were a stunner like "Good Enough" or "Sweet and Shiny Eyes" here. But Bonnie is singing rougher than ever before. Anyone who can induce me to dance to Eric Kaz has got to be doing some kind of job.