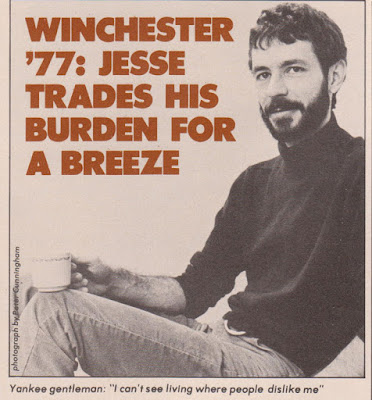 Jesse Winchester : Nothing But a Breeze

In May of 1977, singer-songwriter Jesse Winchester ( "Biloxi", "The Brand New Tennessee Waltz", "Sham a Long Dong Ding") performed his first US concert tour since moving to Canada in 1967 to avoid the draft. On January 21, 1977, President Carter granted amnesty to Vietnam War draft dodgers. Discovered in 1970 by The Band's Robbie Robertson, Winchester, whose ancestors include Robert E Lee and one of the founders of Memphis, had just released his fifth album for Bearsville and was hoping he could sell some copies by touring.

Rolling Stone 's Frank Rose caught up with Winchester who was a bit uneasy with the whole "singing draft dodger" label:

Labels: 1977, Amnesty, Jesse Winchester, Nothing But a Breeze, Vietnam