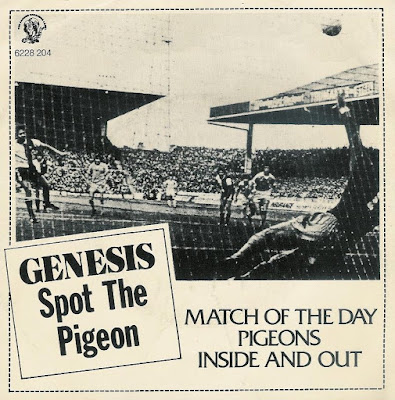 In May of 1977 Genesis released a three songs EP called Spot The Pigeon, the last studio release to feature guitarist Steve Hackett. Hackett's "Inside and Out" is the most prog-rock tune on the EP, taking up the entire second side. Classic Genesis.

The first side is made up of two pop songs, a clear sign of where Genesis was heading (the UK #7 /US #23 hit "Follow You Follow Me" was nine months away). The tunes are not concerned with the subjects that drove Peter Gabriel to grab his pen. "Match of the Day" is about hooliganism at a soccer match and "Pigeons" is about...pigeon poop.

"Pigeons is fun," says Tony Banks in Dave Thompson's Turn It Off Again: Peter Gabriel , Phil Collins and Genesis. "It was really a little experiment to try and do a song around one note really. It's a good little song from that period really. I like it"

The EP was a popular item in its day, climbing to #14 in the U.K. singles chart despite little play by the BBC.