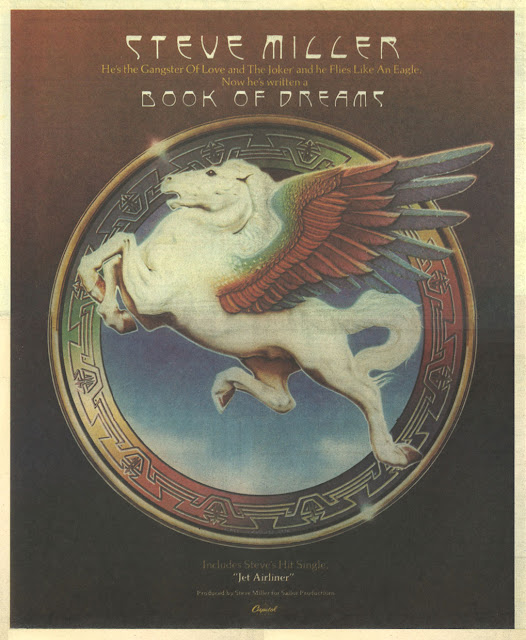 In May of 1977 Steve Miller Band released its tenth album. Book of Dreams was recorded at the same time as Fly Like an Eagle, and, like its twin,  contains just as many radio friendly hits and synthesizer noodlings .  Naturally it went triple platinum in the United States.

It is interesting to me that the first single, the US Top 10 hit "Jet Airliner", isn't an original Steve Miller song but a cover of a four year old tune by keyboardist Ben Sidran's buddy, Paul Pena. Royalties from the single were sometimes Pena's only source of income for the rest of his life.

There are so many nice things you could say about the new Steve Miller album. You could say, for instance, that it sounds great turned way up loud, with its full-tilt rhythms propelling you into some kind of bright crystal space. You could talk about how open the sound is, how porous and rich, and how sunny and downright friendly Miller's voice sounds. You could rap endlessly about the skillful use of modern recording technique to achieve exciting textural effects. But the important thing to say, and it ought to be done straightaway, is how dazzlingly appropriate this music would be if it were coupled with some videotape of West Coast hang gliders used for a Pepsi commercial.

To those who have been dismayed by the progress of the Beach Boys' more or less grotesque attempts at a creative comeback, the recent commercial success of such journeymen survivors as Peter Frampton, Fleetwood Mac and Steve Miller is a heartening sign. It means that laid-back rock and no-thought lyrics can still be had in something other than the dude-ranch space-out of such L.A. hustlers as Linda Ronstadt and the Eagles. What is at stake is the future of open-highway rock. The success of Frampton, Mac and Miller -- especially Mac and Miller -- means the genre is not being abandoned to the cosmic cowpokes 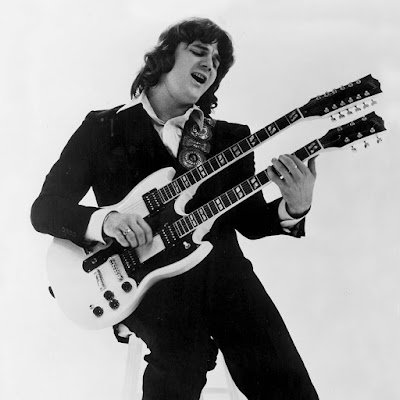 This is important for variety's sake, and also because the cowpokes' vision of life as some sort of sun-drenched avocado sandwich seems essentially wrong. With the Beach Boys unsteady on their lurch toward reality, it's up to people like Miller to attempt the mindlessly breezy music the whole world wants and not even Paul McCartney can deliver every time. But this is tricky business; you can't just retread the old Beach Boys stuff. They preached fun to a generation that was opening up; Miller has to preach fun to a generation that's closing in.

Miller has a strong nesting instinct. His idea of fun is apparently a combination of rural isolation and independence and happy domesticity. As the title of an album that's mostly filled with songs about love, his Book of Dreams is not much different from a hope chest. In "Swingtown," he coos, "Come on and dance/Let's make some romance." In "Jet Airliner" and "My Own Space" (neither of them his own compositions, it's true) he sings about the need for a home and the pain of leaving it. Then there's "True Fine Love," in which he really alters his pitch: "So come on pretty baby," he sings this time, "we're going to raise a family."

This pretty well sums up what Miller has to say. Most of his energies have apparently gone into the sound, and with good results. At its best, Miller's music has always been rich, clipped and characterized by a powerful forward momentum not unlike Fleetwood Mac's. At its worst -- when he was hampered by a schizoid image, a revolving-door band and the all-too-apparent absence of any purpose to his work -- it was sloppy, aimless and dull. But Miller began to pull himself out of his slump with The Joker in 1973, and thereafter he took steps to ensure that things went right.

Although his first nine albums had been crowded into a six-year span, he took his time recording a followup. When he finally released Fly Like an Eagle 13 months ago, it went crazy in the record stores -- Top Ten for months, almost triple platinum, three Top Ten singles. The record was so big that Book of Dreams, which tentatively had been scheduled for release as early as last December, had to be kept on hold for months. Now it's shipped gold; a repeat success appears inevitable 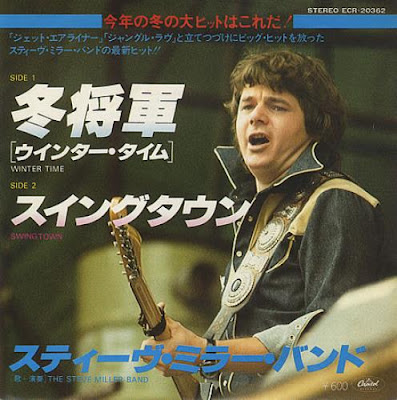 This is logical. Fly Like an Eagle and Book of Dreams are essentially twin albums, mostly recorded during the three-year period that followed The Joker. Fly Like an Eagle is maybe a little stronger -- several of the songs on Book of Dreams were written by current or former Steve Miller Band members -- but even that is debatable. There's the same steady self-assurance here, the same easy confidence that made Fly Like an Eagle so easy to enjoy. Miller obviously knows exactly what he's doing. Every production decision -- as usual, he's produced himself -- was made to maximize the dramatic impact of the deep, easy roll that powers most of these songs. The producer's touch is light and sure; it brightens the sound and stretches its spatial dimensions. Miller's voice, open and adolescent as ever, comes through fresh and bouncy. All this gives songs like "Swingtown" and "True Fine Love" and "Jet Airliner" the kind of simple-minded but irresistible appeal that's so essential to Miller's style.


What Miller gained during his three-year absence from the music scene was the security to drop his masks. Fly Like an Eagle was the first album on which he did not hide behind the kind of persona he ridiculed and apparently laid to rest with The Joker. What's emerged instead is the image of a "real" Steve Miller -- a jocular outdoorsman who's thinking about giving up his Ferrari (according to People) for a tractor. The real Steve Miller just wants to settle down and raise kids and live in bucolic splendor and have it seem as much fun as hang gliding. So do millions of his peers. It's nice they're getting together.