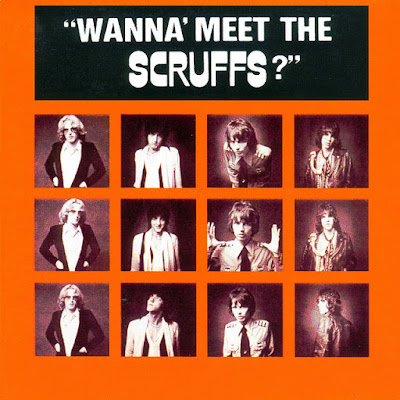 The Scruffs : Break the Ice

Far too many people said "No" to the question posed by Memphis power poppers The Scuffs on the title of their 1977 debut album "Wanna' Meet The Scuffs?". And they missed out. Songwriter Stephen Burns and axeman Dave Branyan team up on some scorchers that take their cues from both Cleveland's Raspberries and the rockers by hometown heroes Big Star. The single "Break the Ice" got some local airplay.

Village Voice critic Robert Christgau was an early fan, giving the debut an A- and writing

Only a sucker for rock and roll could love this record, and I am that sucker. A middle-period Beatles extrapolation in the manner of Big Star (another out-of-step Memphis power-pop group on a small, out-of-step Memphis label), it bursts with off harmonies, left hooks, and jolts of random energy. The trouble is, these serve a shamelessly and perhaps permanently post-adolescent vision of life's pain, most of which would appear to involve gurls. To which objection the rockin' formalist in me responds, "I wanna hear `Revenge' again".

In the forty years that have followed, this debut has become a power pop classic.