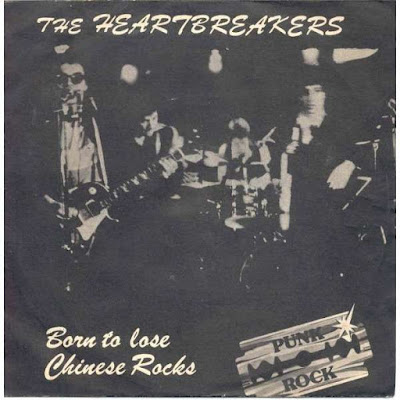 They were the New York punkers who supposedly wore neckties so they could tie themselves down for injections.  Legend has it that it was The Heartbreakers who introduced heroin to the U.K. punk scene, but Jayne County --among others--disputes that story.

Johnny Thunders did NOT introduce junk to the kids of London! Everybody was either on sulphate or junk when I got there and Iggy was a known junky! Also, everyone knew about Lou Reed's junk problem. And they all knew about the junk songs of the Velvet Underground. If anyone in London made junk cool, it was Iggy and Lou Reed, and that is also highly debatable!

The reason I wrote that song was out of spite for Richard Hell, because he told me he was going to write a song better than Lou Reed's "Heroin", so I went home and wrote 'Chinese Rocks'.

The B side, "Born To Lose", is another great song, very much in the New York Dolls tradition. The Heartbreakers burned brightly and flamed out quickly, but what they've left behind is classic stuff.