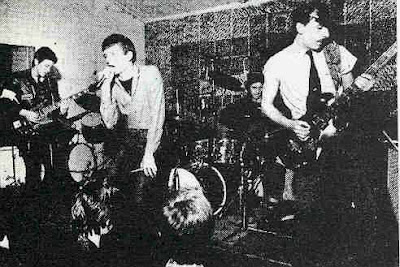 On May 29, 1977 a band calling themselves Stiff Kittens made their debut at the bottom of the  billing on an evening at the Electric Circus in Manchester. By the time Sounds reviewer Ian Wood began writing the review, they had already disposed of the name suggested by Buzzcock Pete Shelley and changed their name to Warsaw. They would best be known as Joy Division until the lead singer took his own life in 1980. The remaining members formed New Order. Wood was unimpressed to say the least, citing Mary Whitehouse, a moral crusader who sued movie theaters ( over "Blow Up") and wrote letters to Top of the Pops ( over Chuck Berry singing "My Ding a Ling").

SCENE. Middle-class, middle-aged (well, over 20), has-been rocker sent off to review punk gig. Can he stand it? Ummm . . . But can he understand it? Doubtful, doubtful. But for what it's worth, the first act Stiff Kittens a.k.a. Warsaw a.k.a. whatever-they're-called-next-week rate zero even on my Mary Whitehouse odorometer. The guitarist must be some refugee from a public school, the neatest thing about the bassist is his headgear and the singer has no impact whatsoever. By the fifth number or so they can just about put together a coherent riff, but I don't think even the most demented headbanger could get off to this. Someone tells me it's their first gig. So let's pass over the rest. Next, please.


And next happens to be the poet, John Cooper Clark. This isn't a poetry column, but whoever programmed this gig deserves a medal, for Clark is a local genius, normally found at Stuffy arts gathering. Yet his lines have the same attack of Rotten or Strummer, with the advantage of a sense of metre and a polysyllabic vocabulary. Plus the fact that he knows what he's talking about. He could be a revelation for the blank generation. 'You Never See A Nipple In The Daily Express' is an acid and deadly put down of all that the establishment stands for: ignorance, double-standards and hypocrisy. For 'Salome At The Ritz' we have a floor show. 'Salome', dark mac and white shades, strips off as the story progresses, revealing herself ... to be a boy. The kids at front don't believe it. 'Salome' toys with a can of Heinz Spagetti. Someone throws beer at his/her genitals and she wraps spaghetti around their lapels.


Then we have penetration.Scene stealers, Penetration - (Dont Care collection) No, Penetration, from Durham. Lift-off. This band are killers. There's a she-vixen of a singer with a great voice, a guitaist with a superb feel for dynamics and some totally original licks quite unlike anyone else you care to name. The bassist, who's about 6'6" and the drummer play hard, fast and never miss a lick. In comparison with say the Pistols, on their first visit to this town 9 months-ago, Penetration are way, way ahead. They could knock a ferret dead at six paces. A and R men, please note.


Finally we read the Buzzcocks. They lack the technical sturm und drang of Penetration, but then this isn't what the Buzzcocks are about. They don't so much parodise the hoopla and hype that surrounds the New Wave, merely ignore it. Pete Shelley writes teen-anthems. With his mock-leopardskin top and sawn off Woolies guitar, you can tell the guy has a sense of humour. Especially when halfway through the set he has to borrow some string for his guitar. 'Orgasm Addict', 'Fast Cars', 'Breakdown' and 'Oh! Shit' are simple (but not dumb) vignettes drawn from life today but about the other side of life for kids everywhere. And then there's the classic 'Boredom', with that classic two note solo. It's a pity though that the limitations of their equipment don't seem, on this evening at least, to let the subtleties shine through, for the other 'Cock: aren't merely a vehicle for Shelley. Collectively, Buzzcocks (the others are Garth on bass, Steve Diggle on rhythm and John Maher on drums) have real Northern Soul, y'know, and they're streets ahead of any of the other Manchester New Wave 'Devolution' (sic) you may have read about elsewhere. But is there understanding south of Potters Bar? Parlez-vous Salford?
at 2:00 AM